Advantages and Disadvantages of Big Companies vs. Small Companies

55731 Views
( 26 votes, average: 4 out of 5)
What do you think about this article? Rate it using the stars above and let us know what you think in the comments below.
A mid-career changer who has worked for government or a large corporation has worked in a completely different environment from that of someone who has spent his working life in small business. Let us highlight some of the major differences between them so you can judge for yourself if the solution to your career problems should include a move from one to the other. 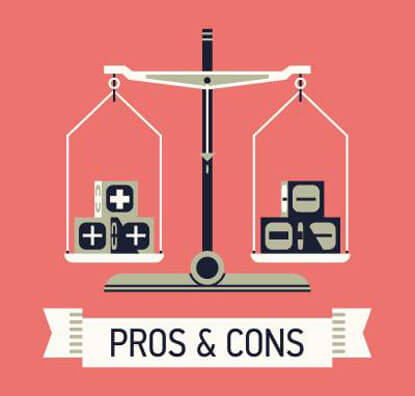 Advantages of Working for a Giant

A company the size of IBM has many advantages. For example, if you are in finance at IBM, you have access to the top CPAs in the country. If you need legal advice, you have lawyers on staff who can help. If you want to go to Disneyland, you can get employee discount coupons.

Large companies have a greater degree of security than small companies do. Size gives you a chance to move within the company. Many times when you read about a large layoff planned for a giant company, the newspapers print only half the story. The company may plan a reduction of three thousand employees, but most of those employees have the chance to find jobs in other divisions. One company had a layoff of two thousand employees that resulted in only five hundred people actually losing their jobs. That's not to say that five hundred people isn't a lot, but three-fourths of those originally laid off found jobs within the company's other divisions.

Giants offer career growth and income that cannot be matched by small companies. Very few small companies can give their executives a huge amounts of compensation.

The time and dollars put into the training programs of many large companies are unmatched anywhere. If you want to change careers and get on-the-job training, the best available is through some of the large corporations. IBM, Xerox, and Hewlett-Packard offer some of the best sales training found in the United States. Bank of America is the Harvard for bankers. General Electric can turn you into the best technical services representative in the country. Moore Business Forms can train you to be an expert in forms design and sales. Small companies cannot afford to put an employee through six months or a year of training during which time they receive little or no return on work performed. Large companies feel they cannot afford not to train employees to meet a high standard of excellence.

Large companies generally offer a greater opportunity to travel and relocate to other parts of the country or even outside the United States. Small firms do not have the multiple divisions and branch offices which make such moves possible.

Finally, large companies almost always offer the best benefits package. Size gives them the power to negotiate good deals for themselves and their employees. A large employee pool means that the cost of benefits is shared by more people.

Advantages of Working for a Smaller Company

Jon is an example of the difference between a large and a small company employee. He is the chief financial officer for a $35-million-a-year company. His prior position was a division controller for a $5 billion company. He feels his greatest advantage in working for a smaller company is his ability to make decisions. There is less bureaucracy and fewer managers, and each one has more responsibility. There is greater risk, too. If he decides to make an equipment investment of several million dollars and the equipment does not work out well, he could put his company into a tough financial position. If it works out well, he has the reward of knowing his decision made a difference. At his old company, he would not have had the chance to make the decision at all.

A number of the managers that were interviewed for a research study thought a smaller company offers the opportunity to see how all parts of the business – finance, sales, engineering – interrelate. You get to really learn what makes a business tick.

Small companies offer flexibility. Often a new problem or situation means new solutions need to be found. There will not be a policy to cover it. Instead, the employee gets the challenge to create a solution.

A small company may be your ticket to financial independence. Many of them have given stock options to employees starting out with the company, making the employees millionaires when it grew into a big-time corporation.

"When you're riding an elephant, you don't worry about the ants," a corporate chief once said about his company. While this is true, it is also impossible to change the direction of a charging elephant.

Big companies are usually very slow to act. It can take years to get a new idea accepted. Spin-off companies are often created by someone who developed a product idea at a large corporation only to have them sit on it.

Big companies can be too layered with management. You can find yourself ten layers removed from the president, thus being in the dark about the strategy and direction of the company.

Finally, large companies can be too structured. They don't like to be told this, but many of them operate the same as a government bureaucracy. Many companies have policy manuals that cover everything from how to hire an employee to how to change a light bulb. Too many people in the company become obsessed with doing everything by the book. This makes for a company that is entrenched and lacks creativity and spontaneity. In some cases, this actually leads to a loss of market share.

Disadvantages of a Small Company

Small companies can impede the growth of your career. There is usually little room at the top of the ladder. Advancement often means moving to a larger firm with more opportunities and higher income potential.

In this article the differences between working for the public and private sectors of the economy and between large and small businesses have been discussed.

Keep several points in mind when making a decision to move from one to the other. Large public employers and large companies have many similarities. As a rule, the many departments, divisions, field offices, and general diversity required of a large employer mean more opportunities for career advancement within the organization.

But many people feel that the stability offered by such bureaucracy also stifles the individual. These people prefer smaller employers where the individual can make a difference in the success or failure of the business.

Each of these areas – public agency, private sector, large corporation, small company – has definite advantages and disadvantages. When making your decision, keep in mind what you really want out of your mid-career change. You have spent years working in one of these areas. What type of working environment do you think you will enjoy the most? You have to decide the answer for yourself.
If this article has helped you in some way, will you say thanks by sharing it through a share, like, a link, or an email to someone you think would appreciate the reference.

Love Thy CEO: Report Finds CEOs Running Lay Off Agendas Receiving Highest Pay Packets  International Finance and Banking  Need a Good Read?  The Loan Officer  Following the Money: Where to Find Big Job Success in the UK ?  Introduction by Richard A. Debs and Tarek Abdel-Meguid  Developing Talent at Your Workplace  Careers in Management and Supervision  Countercultural Movement  Your Career and Trends in the Job Market