Research on Vocational Preferences of Adolescents

61 Views
What do you think about this article? Rate it using the stars above and let us know what you think in the comments below.
The subjects were selected from four junior high schools and two senior high schools in the Niagara Falls, New York School District. A stratified random sample of 100 males and 100 females per grade were drawn independently and at random from the total population of eighth through twelfth grade students enrolled in the above schools. The original sample of 1000 consisted of 80.2 per cent white, 18.1 per cent black, and 1.7 per cent other, which reflects the ethnic population of the school district. Eighty-five (84.9) per cent of the 1000 students completed all instruments, resulting in a sample of 846 (401 males, 445 females). The number of the original 200 per grade level who completed the instruments are as follows: grade 8, 180; grade 9, 185; grade 10, 154; grade 11, 158; grade 12, 169. The majority of the students came from lower middle class and lower class families. The sample represented a broad spectrum of adolescents, ages 13 to 19, from an academically heterogeneous population. 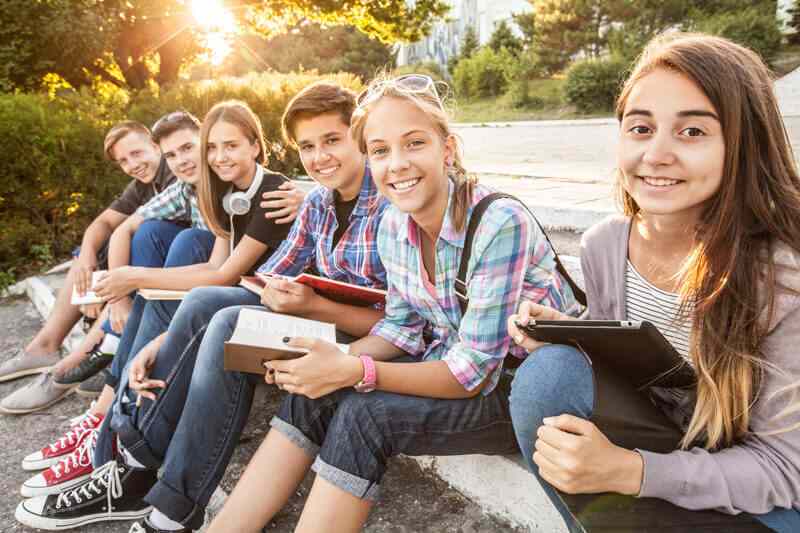 Personal Data Form: This form was designed by Putnam (Note 1) to obtain more specific knowledge of the subject's background and current status. By means of this questionnaire an indication of each subject's family structure, parents' educational-vocational background, and socioeconomic status can be derived. In addition, information regarding the subject's age, grade, and sex was sought in order to verify the appropriateness of his or her inclusion in the study. Finally, each subject's educational plans and occupational choice were elicited.

Tennessee Self-concept Scale: This was developed by William H. Fitts from research begun in 1955 in conjunction with the Tennessee Department of Mental Health. It contains 90 items that are equally divided between positively and negatively worded statements. The score obtained on these items is referred to as the Total P score and it reflects the overall level of self-esteem. Persons with high scores tend to like themselves, feel that they are persons of value and worth, have confidence in themselves, and act accordingly. People with low scores are doubtful about their own worth, see themselves as undesirable, often feel anxious, depressed, and unhappy, and have little faith or confidence in themselves.

Four kinds of validation procedures were used: (1) content validity; (2) discriminate analysis between groups; (3) correlation with other personality measures; and (4) personality conditions (Fitts, 1965). In all cases the results were statistically significant, thus supporting the use of this instrument in the present investigation.

Vocational Development Inventory: The attitude scale of the Vocational Development Inventory was constructed by Crites so that the variables represented central concepts in vocational, development theory and so that the obtained scores would relate monotonically to time. The concepts used, "which assess dis-positional tendencies in the individual's vocational development, were: (1) involvement in the choice process, (2) orientation toward work, (3) independence in decision-making, (4) preference for vocational choice factors, and (5) conceptions of the choice process" (Crites, 1969).

A program of research involving the VDI is presented by Crites in his 1969 publication which suggests that sufficient validity exists for inclusion of this instrument in the present study.

Vocational Preference Inventory: This inventory devised by Holland (1965) was based on the assumption that an inventory can be used to assess personality types corresponding to vocational preference categories. It consists of 160 occupational titles. A person is instructed to respond yes on the answer sheet if the occupation is of interest or appeal and no if the occupation is one that is disliked or uninteresting. The third choice is that the respondent can choose not to mark yes or no for the occupation if undecided.

The inventory yields eleven scales: Realistic, Investigative, Social, Conventional, Enterprising, Artistic, Self-Control, Masculinity, Status, Infrequency, and Acquiescence. For this study, only the six personality categories of the VPI were used. The remaining scales were omitted because their content did not appear germane for assessing adolescents vocational preference categories or other study variables. The first six scales correspond to the six personality types and model environments which are the basis of Holland's theory of personality and vocational choice (Holland, 1966, 1973). The higher a person's score on a scale, the greater his resemblance to the type that scale presents. His highest score represents his preference type (Holland, 1973).

Analysis: Analysis of variance was used to determine the significance of differences in vocational maturity among the six student personality categories. This statistical procedure was also used to determine the significance of level of self-esteem differences among the same six groups. Correlation analysis yielded coefficients indicating the relationship between vocational maturity and level of self-esteem for subjects in each personality category. In all of the statistical analyses the .05 level of significance was utilized.

An analysis of the data involved multivariate analysis of variance for the effects the differentiation in vocational preference categories may have had on the dependent variable vocational maturity. An analysis of variance yielded an F value of 7.299 (DF = 5,840), statistically significant beyond the .0001 level. Since an F ratio of 2.21 was required to accept the hypothesis that a difference exists at the predetermined .05 level of significance, the hypothesis was accepted. There is a significant difference between mean vocational maturity scores in the six vocational categories.

To locate where specific differences occurred, a univariate analysis of variance was conducted which yielded F ratios statistically significant .beyond the .05 level. Table 2 presents the obtained F ratios. These results indicated that there were significant differences in mean vocational maturity scores between (1) Realistic and Investigative, Social, Conventional, and Artistic preference categories; (2) Investigative and all others except Conventional; (3) Conventional and Enterprising preference categories.

The analysis of variance results for male and female subjects classified within the six vocational preference categories yielded statistically significant F values beyond the .05 level for subjects in Realistic, (F = 6.38, df = 1.35), Investigative (F = 7.57, df = 1,150), and Social (F = 30.88, df = 1,230) categories. This indicates that female subjects whose vocational preferences are in Realistic, Investigative, and Social categories are more vocational mature in attitudes than are males in the same categories.
If this article has helped you in some way, will you say thanks by sharing it through a share, like, a link, or an email to someone you think would appreciate the reference.

Girls Careers-Expression of Identity  Congruences in Personality Structure and Academic Curricula as Determinants of Occupational Careers  Status Projections and Ethnicity: A Comparison of Mexican American, Negro, and Anglo Youth  Research on Knowledge of Occupations  Vocational Maturity and Theories on Black Person  An Analysis of the Structure of Vocational Interests  Discussion on Status Projections and Ethnicity  Patterns in Vocational Development of Urban Youth  An Index of Vocational Awareness  Relationship of Self-Concept and Vocational Maturity to Vocational Preferences of Adolescents