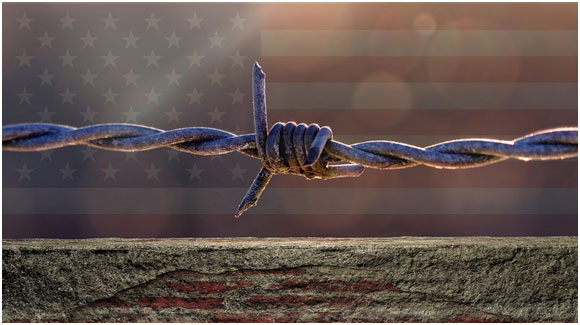 Immigration has been a hot-button topic in the recent headlines. For a country known as the ‘land of the free,’ a phrase designated by author and writer of the U.S. national anthem, Francis Scott Key, and a place described metaphorically as a “melting pot,” what are all these new sanctions on immigration and what do they mean for America?

The truth is, immigration has been a debated subject since the conception of America. The first immigration restriction dates back to 1819, when immigrants were required to report their arrival in the United States.

Prior to that, there really were no rules implemented to limit the entrance of immigrants. However, after the first restriction was put in place, plenty followed after, targeting different ethnic backgrounds for various reasons—fear that they would take jobs away from the already existing ‘Americans,’ fear that they would increase the crime rate, and an overall fear that immigrants would be a burden on American society.

So is it true? Are immigrants a burden? The answer is dependent on who you ask—there really is no clear-cut response.

It might be more difficult to debate the social aspects in which immigrants have left their mark on society because many of those aspects are subjective. Through a financial lens, the effects might be slightly more tangible. However, even that is not as cut and dry as it seems and is often divided between two points of view.

According to The Balance, there were 43.3 million immigrants, living in the United States in 2015. That makes 13.5% of the total population; 69,920 of which are refugees and 26,124 of which were granted asylum by the government.

In the past, immigrants have been less educated than their non-immigrant counterparts; however, over time this fact seems to be changing.

In 1970, more than half of all immigrants did not possess a high school diploma and only 12% possessed a graduate degree.

29% of all immigrants now have a college degree, in comparison to 30% of non-immigrants. In addition, 48% of immigrants that entered the United States since 2010 have a degree; all factors that show the education level of immigrants increasing, which is essentially beneficial to society as a whole because hypothetically, a better-educated society contributes to a more prosperous economy.

Demographically, half of the population of undocumented immigrants was from Mexico, with others from Asia, Africa, and Central America.

Immigration and the Economy: Two Points of View

Like with anything, there are two points of view on how immigrants have affected the American economy.

POV: Immigration as a pro

POV: Immigration as a con

Both points of view make valid arguments and the results of the studies mentioned above are also valid. Therefore, based on history, it is impossible to declare both immigration and illegal immigration as ultimately good or bad for the economy.

However, since the 2016 election of Donald Trump, there have been significant changes to immigration sanctions.

Since his arrival, Trump has made numerous changes to the climate of immigration.

Political reporter Tal Kopan wrote in a CNN article, the list of changes that occurred in the span of a week:

All in all, the Trump administration is making immigration harder.

How Will More Immigration Sanctions Affect the Economy?

Stricter enforcement of immigration policies means that some businesses have been punished for hiring undocumented workers or have trouble bringing in or keeping legal immigrants with special skills.

In the 2018 Littler Annual Employer Survey, a report based on responses from 1,111 in-house counsel, human resources professionals, and C-suite executives, “tighter restrictions on visa adjudications, such as those for employees with specialized skills and temporary workers, was a top concern selected by 48 percent of respondents. More than a third (36 percent) expressed concern with increased workplace immigration enforcement by U.S. Immigration and Customs Enforcement and associated agencies.”

With the Trump administration making it more difficult for foreigners to legally work in the US, companies have had to retrain their staff and make new plans concerning their workforce numbers.

“It’s not surprising that the visa process and immigration enforcement emerged as employers’ top concerns,” said Jorge Lopez, chair of Littler's Global Mobility and Immigration Practice Group. “The increased scrutiny being applied to employment visas and rule changes impacting visa programs, which often come mid-stream and without prior warning, make it difficult for employers to plan ahead and manage their workforces. In addition, the increase in worksite enforcement and raids have naturally heightened employers’ focus on worksite compliance issues and properly addressing those concerns.”

How Businesses Are Experiencing Trump’s Reform

Laura Handrick, a staff writer for Fit Small Business, a company specializing in human resource topics and certified as a Senior Professional in Human Resources, weighed in from her perspective to these following questions:

Q: Is there a shortage of workers now because of the reform?

A: “There isn't a shortage of workers, so much as there is a shortage of workers willing to work for minimum wage. Immigrant workers are often willing to accept any employment, including minimum wage. With more immigrants 'in hiding' that means there are fewer workers willing to apply to jobs that are entry level. That means employers have to pay workers more to get them to apply to these same jobs, such as a restaurant dishwasher or a retail stocker.”

Q: How has this affected employers?

A: “Employers are having to offer perks to attract entry-level workers, including tuition reimbursement (Walmart), ongoing management development training (fast-food), and options like flexible scheduling or employee benefits. Employers also have to work much harder to retain the employees they have, as replacing those employees takes longer and is more costly since they have to cast a wider net in an already low unemployment (4%) marketplace.”

One restaurant employer I know provides legal services to his best immigrant employees to help them stay in the US. That's expensive, but may be worth it to retain top talent.”

Q: Have businesses been financially impacted by the reform? If so, how?

A: “Businesses have been financially impacted in the sense that there's been a wake-up call for even the smallest of employers to get their paperwork in order. They no longer want to risk being fined for violating immigration laws, so they're using HR/payroll software, running background checks, or hiring HR staff to ensure that all new hire paperwork is accurate. They also have to increase hourly wages to attract workers, as well as offer benefits to retain existing staff. All of that costs money.”

Q: How has the reform affected employers, overall?

A: “Employers who rely on entry-level workers, such as food service establishments and home services, like housekeepers are having to be more diligent to verify I-9 documentation, and may be turning away workers who can't provide valid employment authorization. That means that instead of focusing on their core business, they're having to spend time and money to hire HR staff, or use payroll systems and background checks to verify that their workers won't be 'taken' from them in an INS raid.

In some cases, existing workers quit, for fear that if they're 'caught,' they and their families will be deported. I talked to one business whose housekeeping staff feared that their kids and family would be taken from them while they were away at work. Even though they had paperwork, their family members didn't. And they feared losing their family if they weren't home to protect them from deportation.”

Weighing in from an employer’s perspective, Gregory Shepard, owner of Emily’s Maids, a house cleaning service in Dallas, Texas heavily relies on immigrant workers and his business has been directly impacted as a result.

The biggest issue he says is a “lack of competent workers” and that “this is a common topic of discussion when talking with other maid service owners.”

In order to cope with all the new changes, he said hiring a position fully dedicated to HR was his solution. Although costly, this decision has increased the finding of more quality workers for his business.

When asked how this reform has affected business in general, Shepard had this to say:

“These are really jobs Americans do not want or, if they want them, they lack the skills to do it correctly. Migrant workers provide good services to Americans. I hope we find a solution that’s practical, not political.”

It is clear that Trump’s immigration reforms have caused business employers to reevaluate their hiring standards and protocol. HR departments are forming or being strengthened and paperwork is being taken more seriously. Employers have also had to amp up employee benefits because of the shortage of skilled workers. All of these factors have strained businesses because a lot of extra time and funds have to be put aside and spent.

Whether this is ultimately detrimental or beneficial to employers and employees is not yet clear. However, it is clear that businesses have a long road ahead of them in fully accommodating these new changes. Like with most things, only time will tell.

Real Estate Boom To End? - No!

Homeland Security Jobs Offer Careers to Be Proud Of