Post Jobs > Employer Articles > Self-Improvement > Your Workers Want Input & Responsibility: Will You Be that Kind of Boss?

Your Workers Want Input & Responsibility: Will You Be that Kind of Boss? 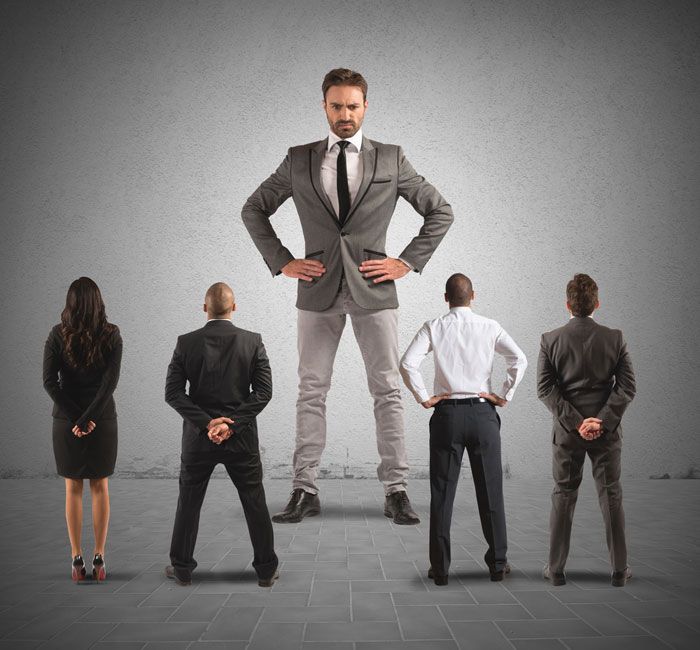 A boss who’s more than bossy

This is not just good advice for bosses. This is good for anyone in any kind of relationship.

The best leaders understand that leadership is also a conversation—a two-way dialogue—not a diatribe. It’s also the best way to motivate and inspire others, both individually and at a group level. Mindset is important and if you don’t have the right mindset, it’s not an easy problem to fix. Why is it a problem? Because engaged employees are better employees—engaged employees happen because of good bosses. And there are rewards to employers: Nearly 40% of workers work harder if they’re happier in their role. And when they’re more productive, they’re more profitable for you. And when you consider that 70% of the American workforce is disengaged, clearly, management has some work to do.

The good news is it shouldn’t be hard to do.

Leaders seem to have something of a perceptual problem, generally. According to research, their leadership styles aren’t meeting with workers’ interests.

An advocate for decentralizing decision-making and allowing for more collaborative workspaces, Mark Robinson of Kimble Applications, a software company, said, “We are moving away from a world where it is seen as the bosses job to tell people what to do. It is the boss’s job to provide clarity of mission and to remove obstacles to the team’s success.”

This philosophy seems to mostly agree with what workers want. According to Kimble’s research:

Another survey showed more than three quarters of respondents said that their managers have “glaring flaws.” Their beefs broke down like this—managers are seen as:

The most cited skill that workers want from their bosses is an ability to motivate as well as coaching and training skills, making decisions, and delegating. A manager’s ability to express well where an employee is in their job performance including areas where they can improve plays a highly significant role in employee retention.

Those promoted to leadership positions can also help to inspire and develop others. Not all bosses are successful in doing so: More than three-quarters of employees in a recent VitalSmarts survey said their managers had “glaring flaws,” such as being overwhelmed, having poor listening skills, and seeming either unfair or uninterested. These qualities are almost certainly the opposite of what HR teams, let alone employees, want.

How did a manager ruin motivation in your workplace?

Motivation is not always within the control of management. Employees also have lives and circumstances outside of the workplace. Even so, motivation can be fragile and many things can happen to kill employee engagement. Here are some of the unfortunate management styles of motivation-killing bosses. Mix and match:

What do I do if my boss won't promote me?

Of all the things you’ll need for career advancement, the one that may be least negotiable is a good boss. Are you looking for a future leadership role? Working for a good leader—the right leader—is key. And finding mentors, coaches, sponsors, and champions wherever you can doesn’t hurt either. But if you aren’t blessed with a good boss—and have one instead that makes it difficult to build a good relationship with or provide value to you—then you may find the most useful thing you can do is cut your losses and find another one, within or without your current job.

Or, what if you do have a good boss but the path upward is narrow and linear with diminishing opportunities the higher you climb? Accepting a narrow definition of success could also be a way of limiting your opportunities. Be open to adjusting your plans and visions.

Why do good employees leave? It’s for these very reasons.

Employees care about the business performance of their employer: An overwhelming 75% of them say they do and yet only 23% of them actually know what that performance is. Transparency also seems to be a problem. What this indicates is that employers are missing out on an important opportunity to capitalize on their workforce’s dedication and interest.

Because employees care, they also want to contribute. Not allowing them to contribute is how managers hold them back. Now, having a voice and using it doesn’t necessarily mean that what have to say will be all good, but they can have useful perspectives from where they stand. And those perspectives could offer managers something they may not otherwise see from their own lofty perches. Those insights may have real value. Maybe they have a more informed perspective on the pipelines or workflows or even the end users—your customers and clients. Plus, everyone wants to be heard. It’s a basic human need that becomes all the more important when it has to do with an endeavor that you spend 35% of your life doing, i.e. your job.

For management, listening offers other rewards:

That’s why you should do it; here’s how:

You’ll need the will. It’ll need to be a priority. You’ll have to acknowledge that it’s a skill component that’s important in your role as a leader. Listening also means no talking over, interjecting, or “splainin’.” If you believe that you’re the only one with all the answers, you’ll never have an incentive to hear what’s being shared. This is how you create the mindset of someone who can hear what’s being shared. Understand that listening is an act of “co-creation.” This doesn’t diminish your own skills or intellect; it just recognizes that your colleagues can also have something of value to add.

If this is difficult for you, you need to understand what exactly the obstacle for you is. Leaders, who’ll often act as the alpha personality in most conversations, may find themselves:

None of the above is conducive to “empathetic” listening (or the more scholarly active-empathic listening—AEL): To listen empathetically you begin by having to actually care about what other people have to say about something. You listen actively and combine it with empathy by trying to understand others’ perspectives and points of view. And as “empathy” would indicate, the idea is to put oneself in another person’s place and try to see things from their point of view while including your own.

When you can do this, you recognize verbal and nonverbal cues, including tone, facial expressions, and other body language—you’re receiving information from all the senses and not just hearing. The more interested will want to probe a bit deeper, endeavoring to understand the feelings of others and acknowledge those feelings.
To help yourself toward this objective, you may offer responses like:

From there is processing: this involves understanding the speaker’s intended meaning and keeping track of the points of the conversation. When this is done effectively you’ll have taken into account what the other is saying and will summarize their points of agreement and disagreement as well as capture the global themes and key messages from the conversation.

The person being heard should be assured that listening has occurred and that you’re encouraging the communication to continue. Being able to respond to the speaker effectively allows you to give appropriate replies through verbal acknowledgements, deep and clarifying questioning, or paraphrasing. Important non-verbal behaviors include facial expressions, eye contact, and body language. Other effective responses might include head nods, full engagement in the conversation, and the use of acknowledging phrases such as ‘That is a great point.’

Even more that better bosses can do

Employees want to be seen and heard. They’re also concerned with managers holding employees back and what they as an individual can or can’t do about it. It may be helpful for companies to implement non-traditional performance management programs that could instigate more frequent meet-ups between supervisors and subordinates as well as creating dynamic assessments of employee responsibilities and expectations. This should include the use of more frequent direct performance reports rather than annual or semi-annual assessments.

But follow-through is vital. Too often, such well-intentioned programs aren’t carried through by managers and scheduled check-ins aren’t honored. Without a commitment of time and attention by management, these programs can have little value. What this means is that the traditional paradigm of top-down management is in a full-scale change. When asked “how to improve personal relations with your boss?” employees most often cite accessibility and lack of interaction. Overwhelmingly, research has shown that the value of communication is in a free flow going in both directions. Employees want to feel they have value, and even if ultimately their input has limited affect, for their mental comfort, they feel better when they’re heard.

As is true in any relationship, listening is vital.

Negative Aspects of Interviews, Which May Result in Failure

How To Develop Your Own Skill At Pacing