What Job-Seekers Should Know about AI Hiring Programs

What do you think about this article? Rate it using the stars above and let us know what you think in the comments below.
Summary: AI vetting programs are the wave of the future, and job-seekers can expect that they will soon be analyzed by “smart” algorithms when applying for work. 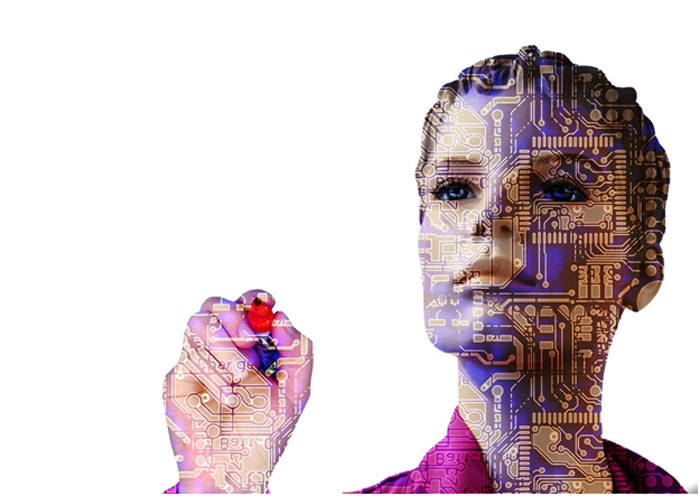 Forget impressing Human Resources (HR). Try, if you can, to impress the new AI that the bigger companies use to select prime candidates for key positions. Giants like Google and Facebook have been honing AI software so that if it doesn’t entirely replace HR departments, it will greatly supplement them, so at best you will be facing a human computer partnership: an interview, in short, with a cyborg.

Here’s how it works: HR has always been a muddle. Sifting through hundreds, sometimes thousands of résumés and applications would daunt any human being. Hiring “the one” costs six weeks for a new hire and $4,000, according to Bernard Marr; and 65 percent of new hires start looking for a new job within 90 days of being hired, according to Karsten Strauss. Just about all hiring companies want to streamline this process and get the correct candidates for their open positions with as little fuss as possible. So how do these computers go about helping HR hire new employees?

Waves of startup companies offer data-mining software capable of culling 4,000 job candidates down to a solid dozen. While each company looks for their own perfect candidate, the technology is nonetheless still in its infantile stages. But even with that, it is projected that computers will perform a majority of a company’s hiring tasks within 10 years. With the HR assessment market at $100 billion, these various startups are competing to be the one who makes the correct choice.

Google is a natural leader for data mining, and their research has scandalized previous assumptions of hiring wisdom. For instance, grade point averages (GPA) and other test scores count for nearly nothing against or for job performance. Not even college education is a sure win, while at the same time, Google themselves have increased the head count of their non-collegiate graduate workforce by 14 percent.

Ivy League schools do not predict job performance, though less tangible qualities give fairly much the same clues. What truly matters in a job application is grit and persistence. In short, doing actively trumps the applicant who states they know how to do. Some AI programs are canny enough to look for how many roles you took on in college, along with any extracurricular activities in which you have participated. Sure, the amount of work you do in college matters, but such social suicide as posting Facebook photos of you drinking and partying, can carry even more weight toward your application.

While subject grades, test scores, and school prestige matter little, AI technology chooses instead to mine your media presence from Facebook to whatever other footprint you’ve left on the internet.

Fama, one of these data mining companies, can get in your head and infer clues to your worldview and beliefs. Fama creates a data set based on thousands of students labeling texts, photos, and videos, using an algorithm to identify possible bigotry. Natural-language processing software comes up with discriminating profiles predicting how a potential hire might fit within the company’s culture.

Certain AI upstarts use algorithms to analyze video interviews. HireVue for instance uses psychologist Paul Ekman’s “atlas of emotions,” – 10,000 facial expressions called “micro expressions” that pass the face as quickly as 1/25 a second – to read into your soul. Computers are supposedly able to know us better than we know ourselves. As Jennifer Alsever reports in her article “How AI is Changing Your Job Hunt,” HireVue’s CTO Loren Larsen claims, “A person may say they loved their boss, but when they say the word ‘boss,’ a flash of contempt crosses their face.” When these micro expressions pass our face, the hiring software compares it to thousands of similar expressions, thus reducing what we say and do to a mere statistic.

Other less mind-boggling infiltration reads our use for saying “please” and “thank you,” as well as words such as “I can” versus “can’t.” Your words can be analyzed to determine your character and work ethic.

Google’s vast array of data sets allows them to scan millions of jobs and the performance required of those jobs, which they use to reduce applicants to a bare few. Entelo, another data mining company, has studied the internet and social profiles to predict which applicants have the greatest chance of switching jobs, so a hiring company won’t waste time on the uncommitted.

Data mining is a computer’s business. These algorithms allow HR to bypass their own biases and get to objective and statistically proven correlations. EngageTalent.com and HiringSolved.com study profiles to come up with their statistics. HiringSolved holds 480 million profiles it uses to train its AI.

Initially, these upstarts appeal especially to high-volume job sectors such as call centers and customer-service jobs. Turnover can be predicted, allowing the drag of the hiring process to diminish.

These brands of data mining software are just starting out. However, over time their data sets will allow the computers to know with certainty what eager employers would like to know about fresh hires, such as job commitment, work ethic, and whether a person will or will not fit a corporate culture.

“If you think about an interview, it’s an outcome of a lack of information on both sides. They (the candidate and employer) have to talk with each other in order to understand what you know and what you don’t know,” said CEO, Liran Kotzer of Woo, another AI company. “But if there’s a machine that knows everything about your past experiences, your projects, your culture – that machine is going to tell you that there’s a perfect fit and both parties won’t question it.”

“Job interviews can be harmful,” wrote Yale School of Management professor Jason Dana, “undercutting the impact of other, more important information about interviews.” He claims human hiring managers make incorrect inferences about whom they might hire.

“We can look at 4,000 candidates,” said entrepreneur Jason Freeman, “and [using AI software] whittle it down to the top 2% to 3%. Forty-eight hours later, we’ve hired someone.”

While it may be iffy to mine data that could be discriminatory, Talent Sonar offers the opposite recourse: it analyses résumés and information and hides names and gender clues to help HR departments overcome possible biases in hiring – they look only at the unbiased facts.

“Most interviews are a waste of time because 99.4% of the time is spent on trying to confirm whatever impression the interviewer formed in the first 10 seconds,” said Google veteran Laszlo Bock. While the statistic “99.4” may seem a bit too precise for casual conversation, it is true enough that first impressions are lasting impressions with humans, and their immediate gut sense tells them what they need to know.

What do they need to know? Google’s qDroid determined that intellectual skills, intellectual humility, and the ability to learn predict job performance quite well.

The idea of these programs getting into your head is unnerving. Such companies as Adidas, HealSouth, Keurik, and Reebok use SkillSurvey, which analyzes words used by references, when presented with specific questions. Those who want to work for these companies are intently scrutinized.

“The recruitment market is broken,” explains Kotzer. “It’s a 200 billion dollar market in the US alone – and the problem we have is that 95 percent of the effort and money spent in that market is wasted.

“When you have talent and employers trying to find each other – 95 percent of both their efforts are going on filtering each other. Even if they go to an interview, most interviews end without a hire, so that’s another point where both parties filter each other out.”

It may be intimidating that the cold quick intelligence of the machine could determine whether you get a job, but this is the reality toward which most companies’ hiring process is headed.

AI for Indeed.com could help you assess the salary you should be making, or what befits might accompany a certain job in a certain location. To that extent, AI can work as much for the job-seeker as it can for the employer seeking candidates.

Can we outsmart the AI? It stands to reason that an unscrupulous person could give the machine exactly what it is looking for. Raj Murkerjee, senior vice president for Indeed.com explains that AI uses natural-language processing to search for certain key words and phrases.

“It would look at a sentence and make sense of that sentence. It would sort things that the sentence implies.”

AI searches for action verbs in the active voice, not the passive. A long, difficult résumé including all the positions you’ve achieved and successes you’ve had on the job matters more to a machine, while a clean small set of bullet points would matter more to a human.

Use positive language – “can,” not “can’t,” and be honest. After all, you don’t want to end up in a position you are unqualified for. Courting a machine may seem peculiar, but writing a human-friendly cover letter still helps your chances.

AI systems look for trends, hidden patterns; things that not even hiring managers are savvy enough to seek. In a sense, they do “know us better than we know ourselves,” since they look at statistics and seek patterns too fine for human intelligence. What matters – as always – is doing your best, working competently, and reflecting your honest virtues in your résumés, cover letters, job applications, and at the job interview. The first ten seconds with a human matter most.

It is just a matter of time, after AI becomes ubiquitous, that it will be used as educational software, to train students to be the sort of people who impress robots. Perhaps, after all, business colleges will be taught by the very machines that do the hiring. At least some sort of cyborg relationship will intensify, in which professors use AI data to prepare their students to be the sort of workers that AI-informed job-hirers are looking for. This way, students will have the skills and attitude that impress AI, and the humans behind it, and also give them a clue as to how to write the sort of resumes and cover letters that impress AI vetting.

When faced with AI-informed HR departments

15 Job Search Moves That Make You Look Desperate  How Does a Company Decide Who to Hire?  Informational Interviews: Yes, They're Important  5 Reasons Why Christmas Is the Most Wonderful Time of the Year for Job Seekers  The Importance of a Positive Mindset during Your Job Search  6 Steps You Can Take to Beat the Hiring Odds in 2018  Which Jobs Should You Apply To?  How to Clean Up Your Social Media for Your Job Search  Why You Should Change Jobs Every 3 to 5 Years  Find Your Calling: A Checklist