You’re Sick! Why 90% of Employees Work Sick & Why It’s Wrong 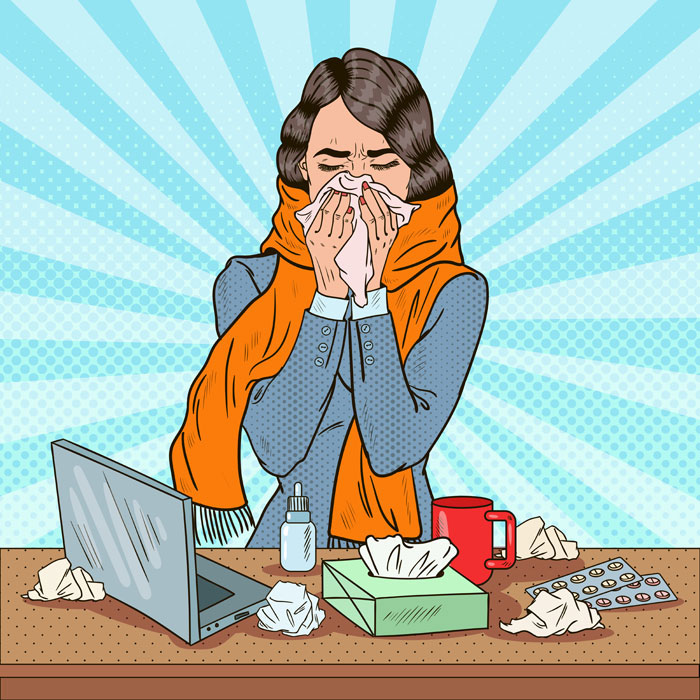 Why coming in sick is downright sick

The next Typhoid Mary could be sitting next to you in your workplace today.

For the sick employee sneezing like they’re under a pepper attack, coughing, sniffling, and sitting behind piles of gooey tissues, they’ll also be spreading germs and infecting others in the workplace. Their coughs launch clouds of viruses into the air and over surfaces. (Respiratory viruses are spread primarily through coughing and sneezing.) That employee is also touching doorknobs, copiers, light switches, elevator buttons, keyboards, telephones, conference room tables, the refrigerator, and microwave—and a number of other items with those germ-splattered hands. There are a billion cases in the of the common cold in the U.S. every year.

Everything in the infected person’s proximity can become a point of contagion. Workplaces are an extremely efficient environment for containing germs and viruses—there’s little air circulation, and most often, outside windows can’t be opened. When your employees come to work sick, they are in contact with others and the result is a superhighway for spreading disease. Typically, 20% of Americans will catch the flu during the high season. This study found that a sick worker could spread germs over 40%-60% of frequently-handled surfaces around the office in just 2-4 hours.

90% of employees have come to work sick

This modern day employee tends to work while ill. According to this survey, employees that stay at home while sick are a very rare occurrence—90% of respondents admitted to going into work while sick. In some cities the numbers were even higher: Charlotte, Miami—96%—Austin, Chicago and Cincinnati—93%. Those who said they always go into work sick was 33% and 57% said they go in “sometimes.”

Another survey said 70% of business professional admitted to going into work sick.

Work sick: Why they do it
And stress: The stress level in companies, especially for those in middle management and beyond, can be extraordinary. If they’re vying for a promotion or fighting for their job, the stress will only be compounded by missing work from taking a sick day.


Work sick: Why no one should do it

Essentially, they are two primary reasons why the sick shouldn’t come to work: When they’re suffering from a cold or the flu, their productivity suffers. By infecting others, they seriously affect productivity across the whole work team. Coming into work while sick is called presenteeism.

Sick days at work rules for all

Paid time off (PTO) policies that encourage employees to stay at home when sick enables a culture of support. This will improve your employee’s morale and make them feel more appreciated. The paid sick leave policy needs to be respected by all.

Your company should show staff that it cares about your employees’ well-being. By doing so, you have a better chance of retaining employees for the long-term. A study by the Limeade Institute showed 60% of employees that believed their companies showed care for their staff’s well-being said they planned to stay with the company for 3 or more years. This compared to the only 7% of those that didn’t feel cared for by their employer. Supervisors can also boost workers’ performance by showing compassion, especially when they match their support with clear goals and benchmarks.

Executives and managers should encourage employees to stay home when feeling ill. Allowing the employee to recover protects the rest of your staff and results in the sick employee being able to return to work sooner. This minimizes losses to the employer. Your employees are your greatest competitive advantage as a company. When they don’t feel supported, it hurts the bottom line. When they are sick, send them home!

Avoid the Trap of Presenteeism

The Ghosts of Work Experience Past

Information Clerks: A Job That Requires Interaction With People