Summary: These office dating horror stories will give you all the inspiration you need to make sure your office has its own set of dating policies. 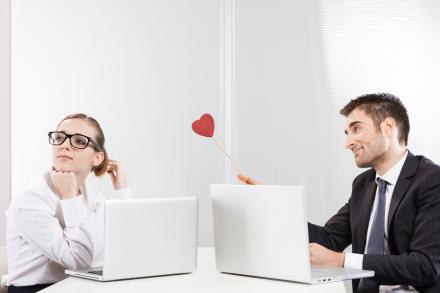 OK, I know that you romantics out there have a tough time determining policy for office romances. After all, your people work hard; they're in the office for most of their waking hours. Naturally some puppy dog glances are going to be exchanged over the copier from time to time. Most of you choose to let sleeping cupids lie; some surveys state that 75 percent of businesses do not have an official policy on office dating.

Maybe it's just not an issue in your office. Lucky you. Or maybe such a situation just hasn't reared its ugly head yet. But someday, it likely will.

Experts say it is not advisable to rule out office dating altogether (that whole forbidden fruit thing), but it is good to implement a policy (and follow it yourself!). Otherwise, something bad might happen. Just consider what happened to these poor souls:

Jonathan was a bartender and dated a female bartender (we'll call her Jane) who worked with him. Things went well for a while—until the night Jane broke the news that her real boyfriend was due back in town the next day. The next night, while Jonathan was working behind the bar, his girlfriend's boyfriend (that's a bit awkward sounding, isn't it?) showed up and sat at the bar. When Jane left for a break, Jonathan sat down with the guy and told him everything, ending two relationships at once. Furious and humiliated, Jane quit her job—but not before lying and telling the owner that Jonathan had been stealing from the restaurant. Jonathan was fired.

Mike was an account executive at a large data storage firm. A female co-worker, Sharon, would send him playful emails, suggesting they go out. Mike wasn't interested and explained to Sharon that he didn't date women at the office (bravo, Mike!). Sharon, however, took offense—and took that offense into a sexual harassment lawsuit against Mike. Fortunately, Mike still had some of her old emails; that ended the dispute, but not the rift.

Rhonda and Jay were sent together on an overseas business trip. Their business turned to pleasure, and their pleasure into a six-month relationship they only made a half-hearted effort to conceal. But when it failed, Jay spent most of his workdays gossiping or complaining about Rhonda. When a coveted position became available, Jay wasn't even considered because of his behavior.

So Close, Yet So Far

Steve and Ann seemed like they might just make it, getting two whole years under their office relationship belts before Ann abruptly called it quits one day. At work. With no explanation. For six months after their breakup, Steve never got one. He still saw her every day, although she pretended not to see him. The energy he once put into great work was then spent on surfing for another job—which he eventually found—simply to get away from her.

Then there was the story of Linda and Tim. Tim was the new sales guy, with broad shoulders and a 1000-kilowatt smile. When he looked at Linda, she felt like she was the only woman in the world. And so did Renee, Melissa, Kate, and Erica. Tim was a salesman alright, and very good at his job. In the end, the women wound up hating each other almost as much as they hated him.

Not only were these situations humiliating for the workers, but they were also frustrating for the managers involved. Don't be one of them.

Getting with the Program

Surveys show that around 25 percent of the organizations surveyed are offering training on ways to best manage workplace romances—a ten percent increase over the last three years. Thank goodness.

Personally, I have never understood why someone would want to be involved in an office relationship. What are these people thinking? "Here's someone I already see and deal with for at least eight hours a day. Oh! I have a great idea! How about we start dating and see EVEN MORE of each other! Hey, maybe I'll be one of the lucky ones and it will lead to something more. Maybe even marriage. Hmmm. And then, I'll see this person 24/7. Every single day."

I say, if you have only one tenet in your social belief system, this should be it: Your workers (and you) should go out with someone—anyone—else. Your friend's little sister. Neighbors. A nice young person your parents want you to meet.

I'm not against love; when it happens it happens, even if it's at work. At least if your office has a policy, you're safe.