Summary: Hiring has changed from an intuitive art to a scientific analysis. And by doing so, the quality of candidates any company seeks to hire have dramatically improved. 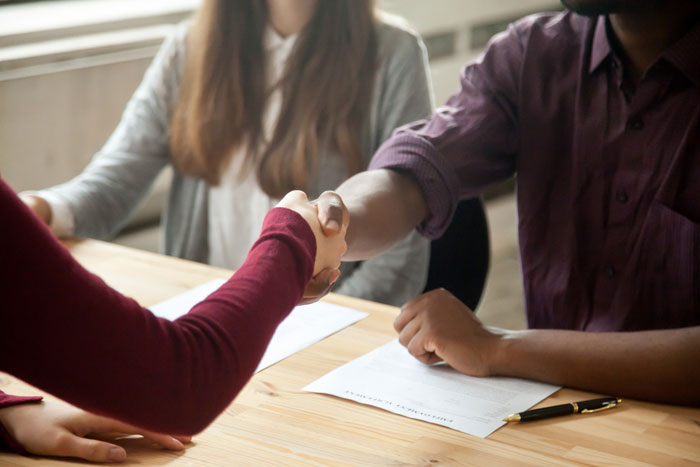 Lately the hiring process in which a job seeker goes from candidate to bonified employee has lost all of its…for lack of a better word…humanity.

Fewer hiring managers and business owners within companies of all sizes seem to rely on instinct, and with the influx of artificial intelligence, instead lean on what has turned into a science that is the hiring process.

Algorithms, calculations and other statistics are increasingly turned to help recruiters locate the perfect job candidates.

Meanwhile the firm handshake has lost its firm grip on who may and who may not be a good cultural fit within a company.

Trust has left the office building – or at least the H.R. department only to be replaced by a machine in which trust is inherent because, well, machines are more trustworthy.

And what’s even more noteworthy about this hiring phenomenon is those who do the hiring are eating up this computerized hiring process.

In short, what could have at one point been called “art” in a H.R. department where instinct and intuition did all the heavy lifting when it comes to recruiting has in itself been fired by this new way of filtering through job candidates.

Recruiting now is a numbers game, when not long ago it was game of hearts.

So, has that improved the recruiting process? No, not necessarily.

According to a recent ERE Recruiting Intelligence article, a 2019 survey of CEOs ranked their No. 1 internal business challenge as attracting and retaining top talent. A similar survey revealed that 80 percent of CEOs worried about the availability of key skills.

Part of their unhappiness may be because research indicates that 46 percent of all new hires fail within 18 months and the “Cost of Mis-Hire Study” revealed that the costs of a mis-hire are 24 times salary. Surveyed executives also revealed that 10 to 25 percent of new hires leave within the first six months.

Not good stats by any means.

In the “science versus art” continuum, it should be no surprise to recruiting leaders that historically corporate recruiting has been managed exclusively as if recruiting was an art.

Evidence of this artistic or intuitive approach includes the fact that you don’t need a degree or certification in recruiting to become a recruiter. And unlike scientific professions, there are no universally accepted success metrics.

The ERE article states that the current intuitive recruiting approach has led to several years of dramatic talent shortages and an almost universal failure to meet diversity goals. And because research has revealed that shifting to the scientific approach can improve recruiting results by up to 50 percent, now is the time for companies to catch up to those who have already adopted the more scientific approach to recruiting so they can net their own top candidates.

Many Fields Have Made the Transition from Art to Science

Historically, there were many fields that were previously treated as an art, including medicine, customer relations and marketing.

However, practitioners started using what is now known as “the scientific approach,” which relies on cause and effect and root-cause identification. In these fields, the intuitive approach quickly became obsolete.

In the business world, the best recent example of becoming scientific is supply chain. Once it became data-driven, it transitioned from the overhead functions of inventory, transportation, and purchasing to a profit center.

Nonetheless, most corporate recruiting is still reliant on the instincts of the recruiter and not the analysis of what a recruit can mean to a company.

In short, these companies need to change their hiring practices only so that they can stay relevant as far as their work staff is concerned.

The Art Approach to Recruiting — Unfettered Freedom to Use Intuition, which is the Wrong Approach

The hallmark of recruiting as an art is an unrestricted freedom for a recruiter to use whatever approach they choose.

Intuitive corporate recruiters operate in a minimal structure, low individual-accountability environment. Individual recruiters are free to come up with and keep secret their own ad-hoc mix of recruiting and assessment approaches.

Recruiters are free to make life-changing recruiting decisions based on intuition, their experience, and vague criteria like fit, attitude, and engagement.

Recruiting and recruiting leaders prefer this approach because their only real accountability is in the area of recruiting costs. This approach is defended by those that “hate math,” or “hate science” and believe there is no place for analytics in hiring.

However, they more than likely have never worked on the business side and refuse to take accountability for recruiting results because they don’t own all aspects of the process.

In direct contrast, the relatively rare scientific approach is defined with the use of a business-like and therefore quantified approach, where decisions are made primarily using data. As mentioned previously, this approach uses the scientific approach to identify causes and effects and to experiment in order to test hypotheses.

Perhaps the best primary indicator of the scientific approach in recruiting is the fact that the quality of hire is always measured. That metric is the benchmark standard for determining which tools and approaches have the highest success rate in predicting new-hire job performance.

Another example of a more precise scientific recruiting process is Google’s use of an interview-question generator. This “guardrail approach” only allows interviewers to ask validated and job-related interview questions. And finally, because it is a business-like approach, the business impacts of recruiting are also tracked, quantified, and reported to executives.

Thus, recruiters now have true accountability as to who they hire.

The Many Benefits of Scientific Recruiting

When recruiting operates as a data-driven scientific approach, you get consistently superior results and business impacts that can’t be achieved when it’s managed like an intuitive art.

If you need more justification, here are 5 of the topmost benefits you can expect when you adopt a scientific recruiting approach:

The ERE article states that it’s a waste of time to debate whether or not recruiting should be data-driven and scientific or intuitive.

Almost every other major business function has already shifted to the data-driven model. That shift occurs not because the function wants to change, but because the need to dramatically improve business results demands that the function change.

Those who have made the change, such as supply chain businesses, customer service divisions, and marketing departments have shifted to a data-driven and hypothesis testing scientific approach.

While their approach has altered dramatically, so has the quality of their hires. Their status, reputation, and their results have all significantly improved as a result of that transition.

And as far as the best workers out there, those who take a scientific approach to hiring always seem to get the cream of the crop.


Related Articles
Computer Programmers: Career Advice
Questions Related to Performance on the Job
The Interviewer Goes To Worrisome You
What to Do When Your Company Faces a Unionization Campaign
7 Reasons Reference Checking Is Dead
All that You Want to Know about the Nature of the Job of Psychologists
The Job Club
Two Barriers That Traditional Human Resources Departments Need to Watch Out For
What Job-Seekers Should Know about AI Hiring Programs
How Google for Jobs Will Impact the Recruitment Industry